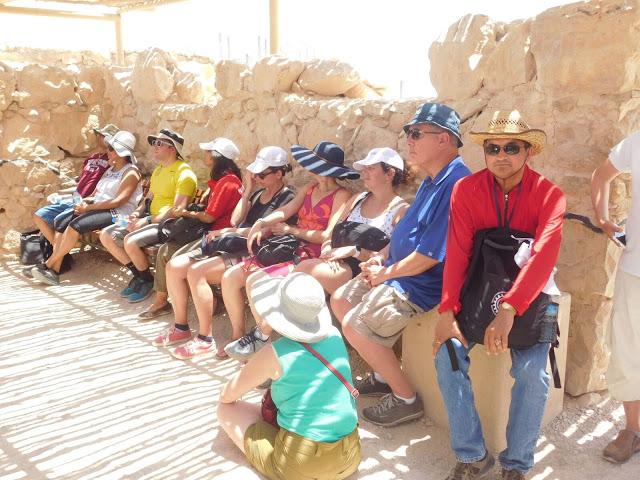 Jewish National Fund, along with Media Watch International, sends a group of professors on the Faculty Fellowship program in Israel for 10 days of touring, learning, and sharing ideas with Israeli counterparts. Applications are being accepted for next year's program now.

Enjoy this piece written by Charles S. (Chuck) Fax, the trip's chairperson, upon the recent culmination of the latest trip.

The 2017 JNF Faculty Fellowship Summer Institute in Israel ended with our traditional farewell dinner in Tel Aviv. The 12-day trip went by in a flash, but we were so busy, and saw so much, that in retrospect, we all felt as if we were in Israel for a month.

I was so exhausted, I could have taken a month to recover. But such sweet exhaustion it was, as this Institute was definitely the most successful ever. Twenty-seven U.S. college and university professors, none of whom had been to Israel before, got to see it from the inside. Our guide, Elchanan Brown, was brilliant; the staffers in charge – Rene Reinhard and Eileen Wedeen -- were professional and unflappable throughout; and the speakers (I lost count of the number), all expert in their fields, were uniformly outstanding, thorough and informative.

We began in Haifa, worked our way up to the Golan, and then turned south again – through Herzliya, Tel Aviv, Rechovot and Jerusalem, down to Be’er Sheva, then on to Mitzpeh Ramon, further down to Kibbutz Ketura, over to the Gaza border and Sderot, and back up to Tel Aviv.  I think we covered the "topic" of Israel like a blanket – biblical and modern history, the evolving role of JNF, geo-political issues, the cultural and religious challenges, and the manifest ways in which Israel helps make the world a better place.

At every stop, our professors met privately with academic peers at Israeli universities and colleges, and we fully expect many collaborations will result.

The level of enthusiasm was so high that seven people in our group elected to remain in Israel for an additional week or more on their own. And when I asked the professors to raise their hands if they planned to return to Israel, every hand shot up. On our last night, I felt sad leaving the group – and of course, leaving Israel. But as we said our goodbyes, we made the firm promise to each other and ourselves -- next year in Jerusalem!
PLANT TREES IN ISRAEL