In the JNF Kitchen: Shakshukeet from a famed Jerusalem restaurant 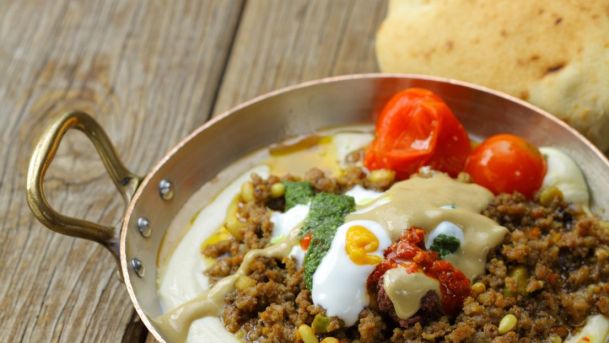 For the next few weeks, our #RecipeOfTheWeek series will feature some fantastic Israeli chefs. These culinary masters are on the itinerary of the amazing JNF Culinary, Wine and Music Tour this June. Learn more about the cultural experience here.

This recipe comes to us from Chef Assaf Granit of Jerusalem's Machneyuda restaurant.He was born and raised in Jerusalem, and the city has always been an integral part of his life, but food, not so much.

Growing up, "my house didn’t have any culinary inheritance," he says. "My mom was the worst cook ever," (though quickly adds he promised his mom he would try not to repeat that!) But when his family ate in restaurants, Granit fell in love with what he saw. After the army he started helping out as an unpaid kitchen assistant in a coffee shop to learn from chefs he admired.

He left the city for short stints to cook in Rome and London but always returned. And when he made plans for his first restaurant he opted for his hometown instead of the country’s culinary capital, Tel Aviv. "I felt like we had something to say culinarily." Granit developed his own approach to local food in the Holy Land. But don't mistake that for "modern Israeli" food, an idea he argues doesn’t exist.

He describes his food as "happy and tasty." By focusing on the atmosphere first, Granit feels the freedom to serve a Japanese inspired appetizer followed by a Jerusalem rendition of risotto. The idea of a top-tier restaurant like this is more radical than it may seem in an age when many chefs are hyper-focused on perfecting specific cuisines, be it Japanese bar snacks or sauces from a far-flung region of Mexico.

Granit and his team travel as much as they can, collecting ideas from different cuisines to apply to what’s available locally at the shuk, which they visit daily for inspiration. "If you use the stuff around you and think creatively, you will always get the best results," Granit says.

But the restaurant’s chefs are not merely customers of the market, their presence has been part of a larger shift in the culture of the Machane Yehuda. Concerts and art projects have popped up, but so have fashion boutiques where family produce shops once stood. "We brought a big, but not necessarily good change," Granit says honestly. The new energy "makes the whole area amazing…but [we] should be careful to not lose the identity" of the market, he adds.

While the shuk continues to evolve in Jerusalem, Granit and his partners plan to where they will open their first restaurant outside of Jerusalem this fall in London. Granit says the ideas for the restaurant aren’t fully formed yet but he hopes it will be somewhat like Machneyuda. The new location will test the team’s creativity and the concept of the restaurant in a city that has almost unlimited access to international ingredients but no central market and a notably different produce selection from Jerusalem.

Granit is also launching a food truck that will operate around the city for three weeks this summer. Each day’s location and menu will be dedicated to a famous Jerusalemite from a poet to a local soccer star and a Palestinian chef from East Jerusalem Granit admires.

Granit says the goal of the project, much like his restaurant, is to tell "the story of Jerusalem through food." Assaf Granit has hosted the JNF Culinary Mission for the past three years at his tapas bar Yudele in Jerusalem. This is always the highlight of the trip!

Enjoy this #RecipeOfTheweek, and if you make any of these recipes, be sure to send a photo of your creation to [email protected] or tweet it to @JNFUSA with the hashtag #JNFfoodie. We might share it!
Ingredients

Fry the onion and garlic until golden.

Add the ground meat and cook until the texture is uniform. In the meantime, roast the pine nuts and pistachios in a dry pan until slightly browned, and add to the meat.

Once the meat is nearly cooked, add the rest of the ingredients and cook for another 10 minutes, watching carefully so the meat does not dry out.

To serve, place a spoonful of tahini on the plate. Top with a generous serving of meat and cooking juices. Serve alongside sauces such as pesto, arissa, amba, olive tapenade, yogurt, and tahini, as well as pita heated over a gas burner.
PLANT TREES IN ISRAEL