It started with a JNF blue box: My lifelong love affair with Israel 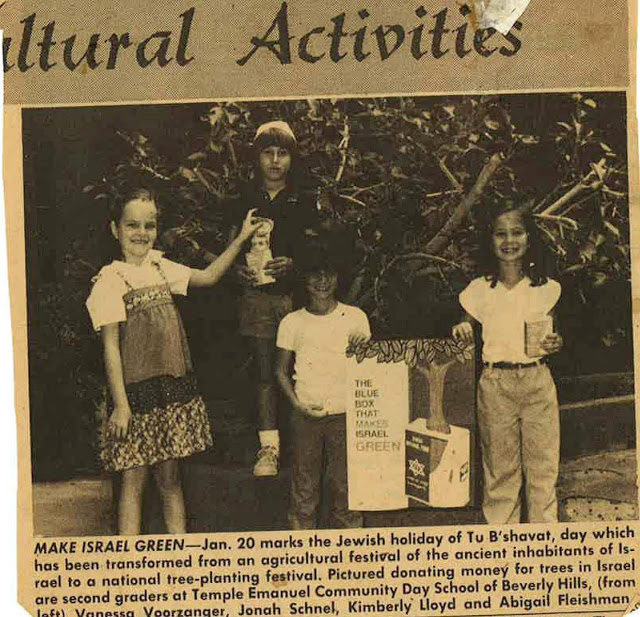 I grew up in Los Angeles down the street from my grandparents. Each Friday night, we'd walk to their house for Shabbat. My grandmother would make matzo ball soup, chicken, and her famous eggplant salad, and my grandfather would lead us in the kiddush. Just after we lit the candles, he'd grab coins out of his pockets and we'd each place one in my grandparents' JNF blue box. It was a light blue, tin box with a map of the state of Israel on it and a small keyhole on the bottom. "It's for the children in Israel," my grandfather would say.

Israel was a constant topic of conversation in our family. "There is nothing more important than protecting Israel," I'd hear it over and over.

My grandparents, who'd both emigrated from Russia at the turn of the century, had never lived in Israel but they’d visited many, many times. Coming from a place where Jews were historically persecuted, they knew how important a Jewish homeland was. And so Israel became their life's work. This was especially true for my grandfather and his sister, whose memories of living in Russia were more vivid than those of my grandmother, who came to the United States as a toddler.
My grandfather and his sister were very active in supporting the Soviet refusenik movement -- collecting money, sending books and other requested items to Russia, and supporting Russian Jews who made it to the United States. They often had Russian family members, and other immigrants they hardly knew, join us for meals and events and even invited the newcomers to stay with them temporarily while they got settled. They were active in their synagogue and in Jewish communal life more generally. However, their greatest passion was always Israel, and they ingrained their Zionist enthusiasm into all of us. Supporting the Jewish National Fund was a fundamental way they expressed this passion.

While we weren't much for religious traditions in my family, we went to a Conservative Zionist Jewish day school, spent summers at Camp Ramah, went on Israel teen tours, and participated in local Israel independence day festivals and pro-Israel rallies. During my junior year in college, I studied at Haifa University and it all clicked for me. I felt as if I'd finally come home.
There was (and still is) something about being in Israel that felt natural to me. Somehow I knew these people, these Israelis: They were my teachers and my camp counselors and my grandparents' and parents' friends. They were funny and acerbic, while somehow being emotional and touchy-feely just one layer beneath. They were completely engaged in their surroundings and living life in the moment.
I felt more alive that year than I ever had before, and Israel became like a drug me to... I needed more. I spent the year after college living all over the country and have been back almost every year since (I'm 41 years old, so you do the math). When I got serious about pursuing a career path, I decided to follow my passion and go into Jewish communal service. I studied at Hebrew Union College and told everyone that my goal was to find a job that sent me to Israel. After graduating, I worked in a few different places before realizing that goal.
I remember seeing the ad for the fundraising position at the Jewish National Fund and immediately feeling a tug in the very depth of my soul. This was the place I wanted to be. I thought about my grandparents' blue box and how much of my life had revolved around the passion that they instilled in me for the land and people of Israel. I didn't want my work to focus on any one specific issue or point of view; I just wanted to be able to support Israel and Israelis -- all of them, throughout the entire country.
Through my work, I have developed a passion for places I would have never visited as a regular tourist -- places like Be'er Sheva, Sderot, the Central Arava, and Akko. My work has helped to build water reservoirs, new communities, historical preservation sites, secure roads, and fire stations.
I've been able to teach other Zionists about the work JNF does around Israel's special-needs communities, agricultural innovation, and bridge-building efforts between cultures. I've felt proud to be an ambassador for an organization that is making visible change on the ground for all Israelis. And, yes, I've been able to travel to Israel frequently and spend time in that place that my grandparents loved so much -- that place that we supported with our dimes and quarters, that place that felt like home before I ever stepped foot on the land.

Do you have a JNF blue box memory or story to share? Send it to us at teddyherzl18 at gmail.com, with "blue box" in the subject line. Be sure to tell us your full name and location and please include a photo if you have one. We might share your piece on the JNF blog!
PLANT TREES IN ISRAEL