Lost in the Arava desert, and (uh-oh!) late to the JNF bus 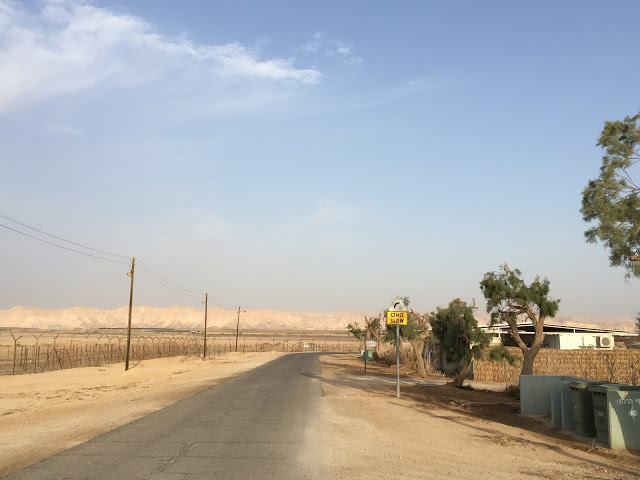 I learned a lot about Israel's Arava on the JNF mega mission last week. With the right agricultural know-how, pretty much anything can, and does, grow there, despite the harsh conditions. The area offers abundant outdoor adventures -- mountain biking, hikes, jeep rides -- set against views worthy of National Geographic. And it's really easy for a couple of city girls to get lost in the desert.
It started simply enough. One of my traveling companions and I decided to take a quick morning walk before our bus departed for the day's activities. It seemed straightforward. We'd walk partway along the road circling Moshav Paran, where we'd stayed for the night, and then turn around and head back the way we came.
The morning was spectacularly still as we strolled, marveling at the beauty of the desert and revisiting highlights of our trip so far -- Red Mountain Therapeutic Riding Center, where kids with special needs ride horses for physical and emotional rehabilitation, and the Arava Institute for Environmental Studies, site of an off-grid village spotlighting promising energy solutions for the developing world. We got so caught up in conversation I was surprised to look down at my phone and see we had just 15 minutes to get back to our rooms at the moshav's charming Kelem guest house to shower, pack, and make it to the bus on time.
We hoofed it.
But as we hurried back along the main road, all the paths leading into the moshav's center looked strangely unfamiliar. We were sure we should turn right at the water tower, but on doing so, we didn't pass the horse stables as expected. We tried several routes in and out from the main road, and made more than a few circles. No luck.
I hoped we might get auditory cues from the roosters that had serenaded us all night (Israeli roosters, apparently, didn't get the memo about mornings being crow time). But they were nowhere to be heard. Oddly, all moshavniks appeared to be taking the morning off too – we didn't see a single human on a farm or porch as we tried path after tree-lined path, some leading just one way. Even the main road was free of traffic.
I had my phone, but no cell service, and we couldn't connect to Wi-Fi for more than a second, though we were able to let the group know we were lost. Really lost. Landmarks might have helped, but the only ones we could spot were a cow. And another cow. Where's the subway when you need it?
Clearly, there was nothing to be afraid of here, as death by Israeli chicken isn't among the top Mideast safety threats and eventually someone would surely walk by on their way to a morning shift. But we were flagrantly violating JNF Mission Mandate No. 1: don't be late for the bus. And for that, I felt guilt. The Jewish kind.
Finally, after about 25 minutes (an eternity in late-to-the-JNF-bus time), a man drove by and we waved him down frantically, as if we'd been wandering the desert, Exodus-like, for years. We told him we needed to get back to Kelem, fast, so he stepped on it, pulling up to the bus where our exasperated fellow travelers awaited. We called the nice man our gibor (hero), a label he seemed to like.
It turned out Anne and I had turned right at the wrong water tower, and for this, our punishment was steep. After a morning walk in the already-hot Israeli desert, there would be no showers for us until the evening. That day, temperatures in the Arava hit the mid-80s. Trust me, we learned our lesson.
PLANT TREES IN ISRAEL