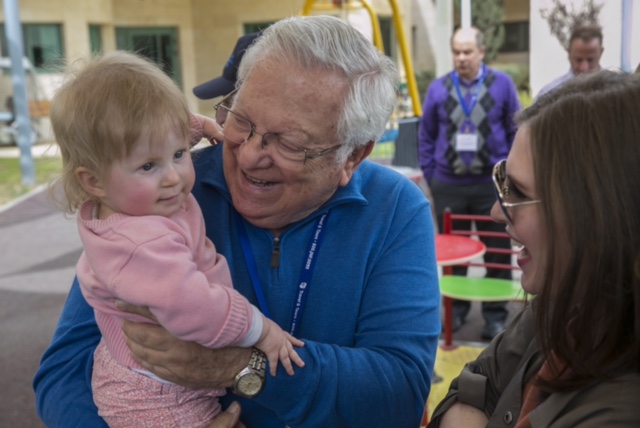 Joe Hess on a recent trip to Israel with JNF.

Today we bring you the story of Joe Hess, a JNF leader from Garden Grove, Calif., whose fascinating personal history is a stunning example of Jewish tenacity and will in post-Holocaust America.

Hess was born in Fulda, Germany, in 1939. He was on one of the last Kindertransport trains out of Europe, and his slight English accent is due to time spent in England, the only country to accept child transports. In fact, his first English word was "inkwell."

Hess came from a family of five children who were separated across the English countryside for the duration of the war. In 1945, at the end of WWII, his future brother-in-law boldly declared he would try and find Hess' parents. Unfortunately, a trip back to Germany revealed the sad reality that everyone was gone. At the urging of a cousin, Hess sat shiva for his lost family in Manchester.

By 1948, Joe, along with his siblings, had made their way to America, where Hess settled in Millville, N.J. He finished high school, went to college to study meteorology, and served in the Air Force during the Korean War, continuing to report to active and reserve military duty for the next 39 years. He worked as an international aerospace consultant for many years, including at a research hub in Boston.

One evening in 1954, as Hess was returning home from a date, he received news from his roommate he had thought was impossible: his father was alive. Twenty four hours later he was boarding a plane to Germany. In a narrative of fate that can only be described as a miracle, Joe reunited with father, whom he'd already sat shiva for, after 17 years. Though they parted when Hess was a child, in a Harry Potter-esque twist, his father recognized him from a scar on his forehead.

The elder Mr. Hess wanted to remain in Germany but at Joe's urging, came to the U.S., eventually remarried and settled in the Jewish-German section of Washington Heights in New York. By the time Joe married his wife Marjorie, their parents were both present in their lives, truly a magnificent gift in the post-Holocaust world. This is something Joe and Marjorie never took for granted. The years that followed included many Shabbat dinners together, and many wonderful simchas celebrated. His father passed away in 1991, after having met his first great grandchild.

Joe Hess has been dedicated to Jewish community all his life. From helping form Temple Emunah in Lexington, Mass., to his involvement in Union Synagogue, he was determined to build a strong Jewish American community before joining the JNF family over 25 years ago.

When Hess moved out west to California, he was promptly approached to become president of the Orange County chapter of Jewish National Fund, which was in need of strong leadership. From there, he went on to become a national chairman. 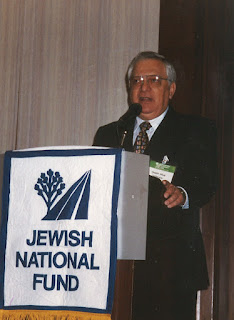 "If Israel had existed, my parents would have been saved" is a thought that still drives Hess in his tireless volunteer work for Israel. His passion in policy and government have also helped Israel receive U.S. forest services involvement and funding from Congress. He was one of the first to draft plans for the JNF reservoirs, as he knew if nothing was done, Israel would be out of water by 2012. Hess also helped JNF achieve NGO status at the UN.

After many years of personal and professional success in the United States, Joe went back to his birthplace of Germany. In the 1980s, his hometown put out a notice that it was funding a fully paid trip to encourage a dialogue with Holocaust victims and current residents. Joe, along with his sister and father, met with many people on this trip, stayed with local families, and spoke with young Germans to tell their stories, which bringing the listeners to tears. They dedicated a synagogue and erected a museum. Hess says he tries to believe man is inherently good, and has kept in touch with many of the people he met on this trip.

This man with an incredible history and a resume decorated with professional and community successes has a storied past, but says JNF is always at his heart.

Joe is past president of the JNF board of Orange County, past national campaign chairman, past vice president of zones and regions, a recipient of the Tree of Life Award, a recipient of JNF’s Gould Legacy Society Heritage Award, and a Century Council member. In his current position he's the liaison to the U.S. Forest Service, vice president of the International Arid Lands Consortium, and responsible for developing relationships with members of Congress.
PLANT TREES IN ISRAEL