The story behind the scroll: Treasured Brooklyn Torah makes aliyah 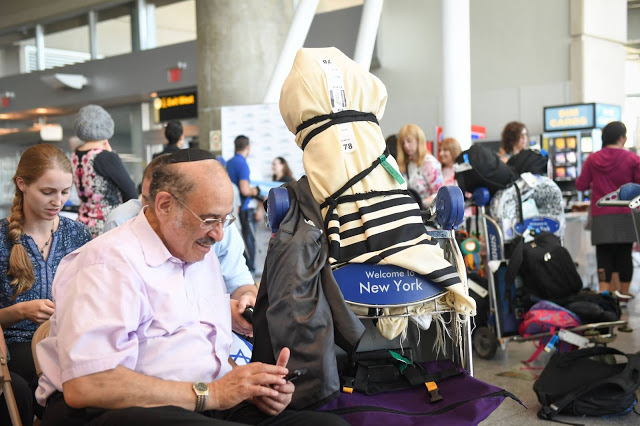 This fall, we're taking time to reflect on new beginnings. With the change of season ushering autumn in, we're reminded of the excitement, nerves and possibilities that hinge on the start of a new chapter. We'll be checking in with students beginning new adventures at Alexander Muss High School in Israel, and olim straight off the chartered planes of this summer's Nefesh B'Nefesh group flights. Stay tuned and get ready to be inspired. What #NewBeginnings are you encountering?

This summer, Nefesh B'Nefesh, one of JNF's partners in bringing pioneers to Israel's north and south, pulled off another round of successful group flights bringing new Israelis home. A process that a mere few years ago was taxing and grueling, NBN expertly facilitate with ease and skill. And while the olim on those flights share some similar dreams, each carries a unique personal narrative and family history.

One such story, of former JNF employee Yocheved Kolchin's decision to make aliyah, touched on the feeling of fulfilling a legacy started by those who came before you. Kolchin's grandparents made aliyah after the Holocaust, and she details how her move, though different in its ease of transportation and aided by modern technology, hearkens back to her grandparents' struggle to come home to Israel.
Another such story comes to us from Margie and David Hamm from Brooklyn, N.Y., who were also among the 220 passengers on NBN's July 2016 flight. The Hamm's daughter and her family live in Israel, and it was their long-held dream to join her there. Along with packing up their lives and their possessions, the Hamms brought a special Torah scroll on their journey. This Torah was commissioned and written in Israel in memory of Margie and David's parents, so as David says, "in a sense, it was going home too."

The Hamms are most looking forward to being close to family, and living in a Jewish country, where the "holiness of the land, if you click into it, can raise you spiritually higher than anywhere else in the world."
This month, the Hamms' son and family also made aliyah. May the Hamms, their children and grandchildren be blessed with many happy and healthy years together in Israel.