These moments touched me most deeply on JNFuture mission to Israel 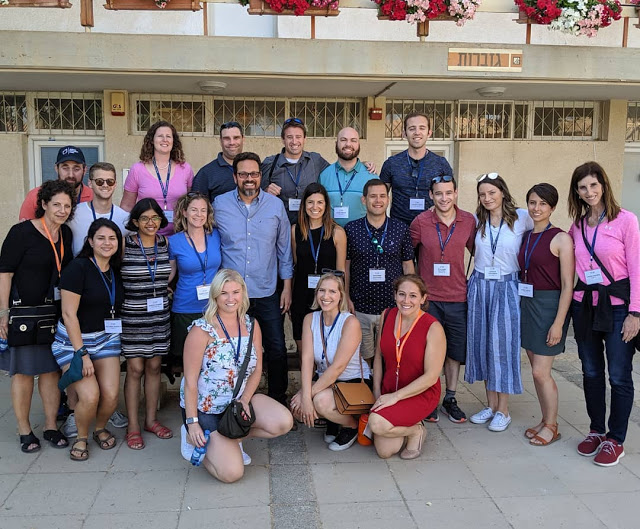 To say my JNFuture Leadership Institute Mission trip this summer was impactful and meaningful would be an understatement. Through a jammed-packed five-day tour filled with meetings, greetings, activities, and introductions, our group, comprised of nearly two dozen young professionals, got a true bird's eye view of Jewish National Fund's operations on the ground in Israel.
From the very first day when we stepped foot onto Ammunition Hill, where JNF's support helped revitalize an important memorial site, to our final meal with Halutza community representative Yedidya Harush, who is now thriving in his new home after having to leave his old one in Gush Katif on the Gaza Strip, our group became more knowledgeable and passionate about the organization we were in Israel to represent.
During the JLIM trip, each of us had moments that touched us personally for very specific reasons. Two in particular resonated with me on a spiritual and emotional level. The first came on our third day, when we arrived in the small Negev town of Arad, a place I hadn't been to, let alone heard of, until our bus pulled up to city hall.
As a former television reporter in the U.S. from 2005-08, I had numerous times stepped into mayors' offices in small towns in West Virginia and Illinois. I had interviewed governors of states with more than a million people and asked questions of high-ranking senators. But at no time did I feel as humbled or appreciative to be in the presence of a government representative as I did that day when we sat down with Mayor Nisan Ben Hamo.
What the relatively young mayor has done in his short term in office is staggering. With JNF's help, our dollars are helping turn Arad back into the Woodstock of Israel, with the construction of a new conservatory, in addition to the building of a new park and green space for the town's residents to enjoy. Because of these developments, condos are being built on the footprints of the park, and for the first time in generations, young men and women are moving back to the town they grew up in. This mayor's vision and passion for the city he serves was infectious and it gave me such pride to know that he was doing it in a town in my country.
The second instance that truly touched my heart came the following day in the city of Hadera, which I consider to be my adopted Israeli hometown. As a Federation employee in Jacksonville, Florida, from 2015-18, I first became familiar with the centrally located municipality because it was our sister city. I formed significant relationships with a number of people there and visited them numerous times, making me truly feel more at home in my homeland than anywhere else.
As we exited the highway and began to descend upon a city center, I saw something that caught my eye, a town shield that looked very familiar. Curious as to where we were, I whipped out my iPhone, and wouldn’t you know it? The word "Hadera" appeared by the slow-moving blue dot signifying our bus' location.

Lo and behold I was back, but this time to roll up my sleeves and get my hands dirty volunteering with the organization HaShomer HaChadash, which brings abandoned farms back to life. After a brief introduction and some pointers from an adorable, enthusiastic 10-year-old volunteer named Moriah, we began molding mud into bricks to construct an outdoor kitchen where workers can make food while in the field. Following our hour tending to the land, we washed off before sharing lunch with HaShomer employees and fellow volunteers, while finding out just how vital farming is to the Israeli economy and learning more about this initiative, which JNF proudly supports.
By the end of the meal, our group fell in love with the little girl we had met just a few hours earlier, as she told her story of growing up in the U.S. before her family made aliyah two years prior.

Following our final goodbyes, I went up to young Moriah and told her just how impressed I was with her and that she has a bright future, made even more special because it will be in Israel. As we boarded the bus and headed to our next destination, Moriah's mother commented on a Facebook post I made letting all my friends know I was in Hadera to volunteer.

As it turns out, this wasn't the first time Moriah and I had shared a meal. Just four years ago, I had Shabbat dinner with her family in St. Augustine, Florida. I distinctly remember watching a precocious 6-year-old Moriah play on the couch while her parents told me of their plans to make aliyah in a few years. Now the dots had been connected, and while neither Moriah nor I had realized it at the time of our chance meeting, we did later in the day, further making us realize something as special and unique as this could only happen in Israel.
These experiences, emotions, and memories are something that will truly last a lifetime, while further motivating my dedication to JNF. What I saw and heard will help me to better convey just how pervasive and impactful the United States' preeminent Jewish philanthropic organization is in the land we love.

Florida resident Matt Franzblau joined the JNFuture Broward board earlier this year and currently serves as its marketing and social media chair. He is the communications director at Donna Klein Jewish Academy in Boca Raton.
PLANT TREES IN ISRAEL