Touring Israel in depth north to south, from my couch

After four months in quarantine, wouldn't it be nice to drop everything and be transported to another world in a time B.C. (before COVID-19)? What if today you could travel and explore Israel, make new friends, share stories and discover (or rediscover) that special place?

I did that during my recent weeklong virtual trip to Israel sponsored by Jewish National Fund. Me and 24 other "tour bus" passengers, during daily one-hour sessions, saw innovative technological advances Israel is making in water desalination and recycling alongside history dating back 6,000 years. We saw the country from the Golan Heights to Eilat, all without leaving the house.

“When the pandemic hit, JNF had the insight to realize that if there is no vaccine, the very notion of travel safety will be non-existent,” said Ido Aharoni, a New York University international relations professor and veteran of Israel’s Ministry of Foreign Affairs. I spoke with Aharoni to learn more about how Israel's tourist industry has been affected by the pandemic.

“What JNF is doing is very pioneering," Aharoni told me. "Technology is allowing you to experience Israel.”

My tour with JNF Atlanta began in the coastal plain and the North, where we saw Zichron Yaakov, one of the first "modern" settlements in Israel just south of Haifa founded in 1882.

Baron Rothschild visited the settlement and saw the potential the slopes of Mount Carmel offered for winemaking.

The town, named in memory of Rothschild’s father, is home to the original Carmel Winery founded by Rothschild. Because of his foresight, winemaking is now a huge industry in Israel, with wineries throughout the country from the Golan Heights to deep in the Negev. Wine tours are a trendy way to experience the country.

The volcanic hills are home to stunning views of the coast along with restored historical buildings, a distinct pedestrian zone and the First Aliyah Museum, which retells how the brave settlers from Europe started the town.

Our next stop was the Hula Valley just to the north in the Upper Galilee. What was once malaria-ridden swampland became a breathtaking nature reserve. The Hula Valley is a stop-over point for more than 500 million migrating birds, representing over 400 species. It is one of the world's top birdwatching sites.

We briefly visited LOTEM, a community for people with special needs to experience nature, hiking trails and other activities before traveling to Haifa and the Bahai Gardens, the holy site of the Bahai faith and a UNESCO World Heritage Site.

The gardens and Shrine of the Báb are built on another slope of Mount Carmel.

There are waterfalls, gardens, and a staircase of 19 terraces with multiple paths that offer distinct views of the Galilean hills, Haifa, the port and other locations.

There was no need to be awakened at the crack of dawn on day two. We left the north and made our way to the center of the country to an excursion of Machon Ayalon, or Ayalon Institute.

The site reconstructs the bullet factory where 45 young members of the Haganah (precursor to the Israel Defense Forces) created an underground factory within a kibbutz that produced more than 2 million bullets from 1945 to 1948 under the noses of the British Army.

Another interesting experience was learning how Israel was revolutionizing the water industry at the Eshkol Water Filtration Plant and Shafdam Wastewater Treatment Plant. Israel is leading the world in recycling water as well as pulling water out of the air and enabling countries in extreme drought to have access to clean water.

Beit She’an is one of the oldest cities in Israel with one of the largest archeological sites. The archaeological park houses Roman ruins dating back 6,000 years. The ancient city, public baths, Roman temple, workshops and other structures are very well-preserved. There is a Roman amphitheater that is still in use today for events and concerts.

After spending a night in Eilat, we began our third day exploring the beauty of the Red Sea and the coral reefs. Our now-bonded group then "climbed" to a spot where you can see Israel, Jordan, Egypt, and Saudi Arabia. Even through our screens, we realized how close these countries are when news reports make them seem so far apart.

Possibly the most inspiring destination of the day was S'derot, a village next to the Gaza strip where people under missile fire only have a 15-second warning to seek shelter. While there’s high tension between Arabs and Israelis, they also join in peace here. 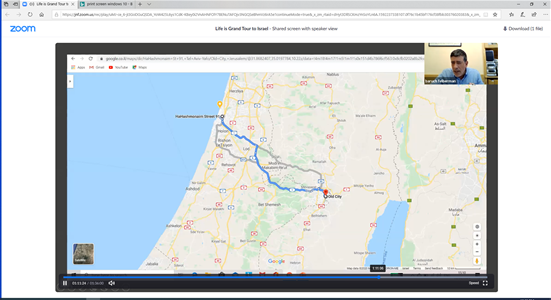 Our fourth and final day was in Jerusalem, home to three faiths: Judaism, Islam, and Christianity. We visited Ammunition Hill, where the victorious battle in the Six Day War led to the reunification of Jerusalem. From there, we visited the bustling Machane Yehudah Market with its colors, sounds, and art. This was followed by a tour of the narrow winding streets of the Old City, The Western Wall, and an exploration of the Kotel Tunnel Tour.

Once you enter the tunnels from the Western Wall Plaza, you follow along the Western Wall passing by a single stone that is one of the largest in the world at almost 46 feet long weighing 570 tons. Our group wondered how that stone got there without modern tools and equipment.

We also explored cisterns and an old entrance to the Temple called Warren's Gate. An ancient passage was discovered there that led to the Temple Mount, a walled-in area significant to the three religions. Warren's Gate is the closest point to pray almost directly under the Dome of the Rock Islamic shrine.

Shabbat closed our virtual tour, and we were welcomed in traditional Israeli style with prayer, song, and dance.

This virtual travel experience brought me back to the Israel I've connected with since spending summers there in high school. My last visit was three years ago.

As Aharoni suggested, virtual travel strengthens the bond between Israel and visitors. Several members of the group, myself included, planned to sign up for a different virtual tour.

Beth Gluck, executive director of JNF of Greater Atlanta, told our group these tours started as a way to supplement income for tour guides since COVID-19 decimated tourism. The trips have grown quite popular, consistently selling out with more tours added regularly.

Each "Life is Grand Virtual Tour of Israel" has a maximum of 25 people including the tour guide.

Gluck led our group, along with two lay leader chairs from JNF, Barbara Lincoln and Gary Rosenshein. Official preparation for the tour included regular emails and updates along with the itinerary, just as you would get on a live trip. Though we would never leave our homes, we were reminded not to forget our sunscreen and hats, along with other fun references echoing an actual trip to Israel. Our itinerary for the week encompassed the entire country, like a typical trip such as Birthright Israel.

Before we "left" for Israel, I asked Matt Franzblau, chair of a previous virtual tour, if he had any advice. "Block out everything at home, put away the cell phone and immerse yourself in the experience." Franzblau said his virtual trip was far better than he had expected. He says he’s been to Israel 3.5 times, as opposed to the three times he’d been before his JNF virtual tour.

Franzblau helped allay my skepticism about how a tour guide in Israel could make a virtual experience with participants from across the globe compelling. Our Israeli guide, Baruch Felberman, admitted the task was a bit daunting, as these are interactive tours, not passive lectures.

We were even encouraged to bond and build relationships with members of our group after short breaks when the tours were over.

“I’ve gotten to revisit some of my favorite places in Israel, have gone to places that I’ve wanted to go, but never had the time, and places I’ve never even known about," one of my fellow travelers, Jackie Goldstein, said. "It’s giving me a chance to escape to Israel every day when we can’t get there ourselves." It was, indeed, a perfect escape from the everyday, she said.

Israel is filled with geographical and historical treasures and we got to experience the usual attractions as well as sights not typically seen by tourists.

This article originally appeared in the Atlanta Jewish Times.