US foodies sample the BEST of Israeli food! 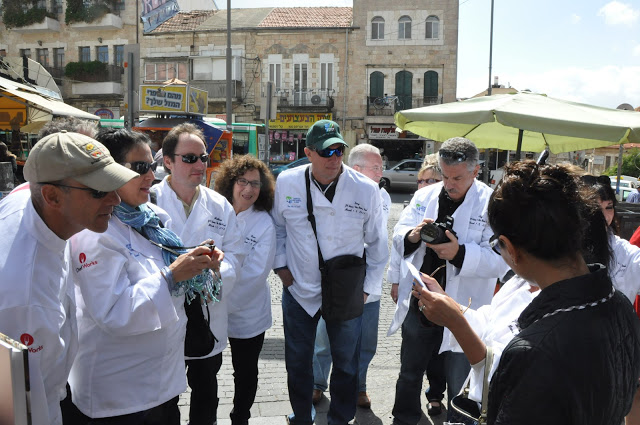 A walking tour of the Machne Yehudah Market
Once again the idea that Israel can attract a group of foodies from all over the US to sample the best of Israeli food and wine is a tribute to the work of the JNF from its inception at the end of the 18th Century to the present.

The acquisition of the land, the development of arable land and the management of scarce resources like water allow today's Israeli's to produce world class quality wines and food and we are sampling some of the best.

From the pioneering organic farming and quality of life environment of Mitzpe Hayamim, through the experience of the melding of cultures at a Moroccan home, to the glorious setting of the home of noted chef, Erez Komarovsky set in the beauty of the Galil, our Mission began on a high note.

We witnessed first hand Israeli and Arab co-operation in the creation of a wonderful gelato shop, fabulous creativity in contemporary dance and commedia del'arte.

However, it keeps getting better.

We were briefed by Mark Regev, the spokesman of the PM about the formation of the new government in Israel, the hopes for peace progress, the expectations of the upcoming visit of President Obama and  an overview of the security in the region.

We had a walking tour of the Machne Yehudah market telling us the history of the market which predates the creation of the State of Israel, which was followed by a fabulous meal made with ingredients from the market.

A very emotional visit to Ammunition Hill was highlighted by the unveiling of plaques contributed by two of the Mission participant's, Makornik Gary Kushner and Herzl Society member Cliff Faber.