Ammunition Hill holds great significance in the formation of the modern Jewish State. First established by the British in the 1930’s as a police academy and weapons repository, the strategic location was captured by the Jordanians in the 1948 War of Independence, splitting Jewish Jerusalem in two. In the Six-Day War of 1967, about 150 Israeli paratroopers staged a daring assault to recapture the site. In bloody, hand-to-hand combat, the Israelis emerged victorious, but not without sustaining severe losses — 36 killed, 90 wounded.

Jewish National Fund-USA, together with the Municipality of Jerusalem and the Government of Israel, has been instrumental in developing and renovating Ammunition Hill as a heritage site, which includes a museum and memorial where visitors, young and old, can learn about what transpired there. JNF-USA has also established The Wall of Honor at Ammunition Hill, which pays tribute, by name, to the heroism and courage of Jewish soldiers throughout history who fought in loyal defense of the countries in which they lived.

In 2017 Sara Cannon, a retired museum educator and curator from Santa Monica, CA, was in Israel, co-leading a JNF-USA-sponsored art and fashion tour to Israel. The schedule was jam-packed with stops at various historic and cultural sites, but it was the visit to Jerusalem’s Ammunition Hill that struck her most.

Alon Wald, now head of operations at Ammunition Hill, met the group, gave them a tour, and described in great detail the fierce battle that eventually led to the reunification of Jerusalem. As Sara recalls, “He told stories of sacrifice and brilliance that just reached my soul as a Jew, as a JNF-USA member, and as a human being.” Wald could not have a more personal connection to Ammunition Hill: His father Rami was an Israel Defense Forces (IDF) captain and a war hero who fell on the first day of the battle. Alon was only ten months old at the time.

“By the time Alon had finished this story, I had just about cratered inside,” Sara shares. “I was deeply overwhelmed on so many levels to hear from a man who had given to the battle for Jerusalem in such a personal way. This story in particular, and everything else I learned, was the deciding moment for me to support this JNF-USA Heritage site in as meaningful a way as I could.”

Sara had clear ideas on how to direct the gift from the Cannon Family Foundation, donating to JNF-USA to create a “decision room” space inside the museum, where military scenarios are juxtaposed against Jewish ethics and visitors are challenged to apply their values to situations that arise in war.

She said that as a museum professional, she had a keen appreciation for the decision room’s features. In addition, she dedicated a plaque on the museum’s entry wall to the thousands of German Jewish soldiers who valiantly fought for their country in World War I, only to have their legacies discredited and their lives destroyed with the rise of Nazism.

“Over 12,500 Jewish soldiers gave their lives to fight for Germany in WWI,” Sara says. “For a while, they were heralded, but of course that was all pushed aside in the Holocaust. I couldn’t get over that; I couldn’t let them be forgotten.” 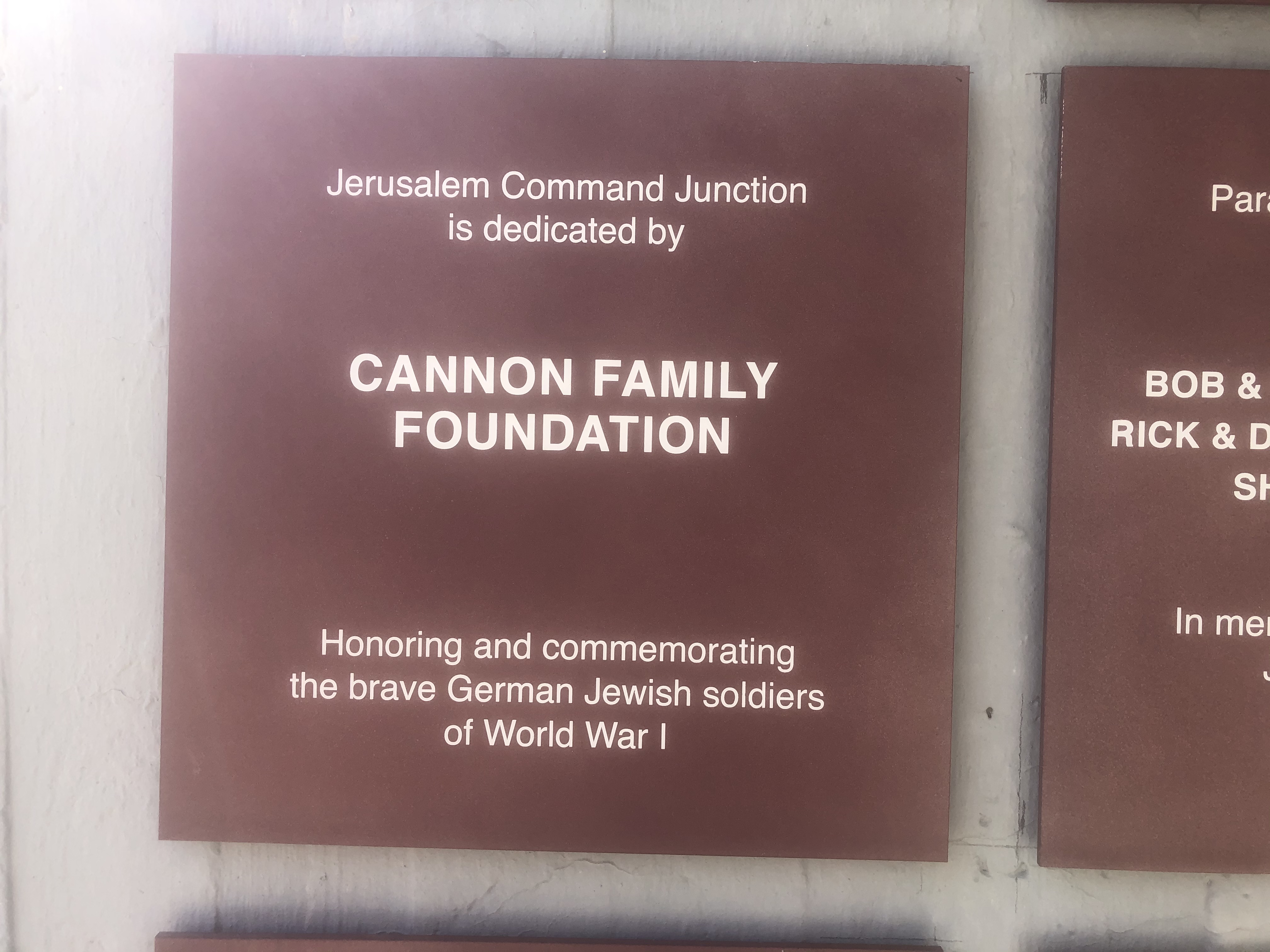 For Sara, it wasn’t a matter of personal history: she did not lose family in the Holocaust. She was simply motivated by a sense of “Klal Yisrael,” as she explains: “I just feel a connection to every Jewish person on earth; I feel we are all related. And to be able to light a candle to dispel that ugly darkness -- to lift the dark shadow that Jews were not patriotic when they very much were -- I saw it as my obligation and privilege.”

What does it mean to have supported the JNF-USA Heritage Site at Ammunition Hill? Summing up the experience, Sara says: “Many people in Israel are true heroes -- they fight so hard -- but JNF-USA enables people like me to do heroic things. This was a way to preserve history and memory, and I felt that if I could make a contribution to that, it would fulfill one of my most important objectives.”

She adds, “A tiny bit of myself and my ideals are now here, in the state of Israel. JNF-USA made this possible and that is one of the reasons I stay so involved.”