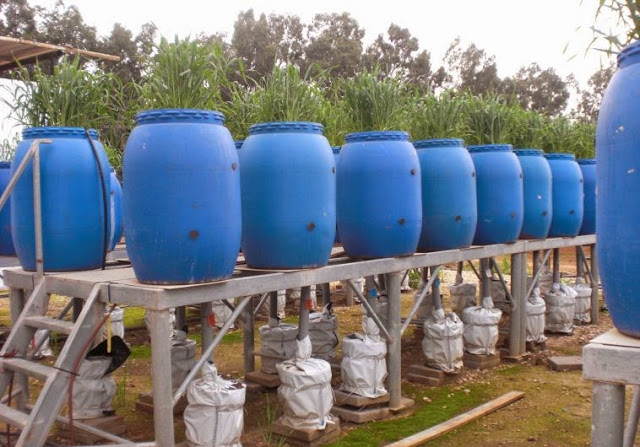 Israel, located in one of the driest regions in the world, is in a perpetual state of water crisis.  Historically, water has often been a cause of great dispute -- as in the biblical case of Isaac and the Philistine shepherds arguing over well ownership. In the thousands of years since that particular conflict, water scarcity in the region has been exacerbated by rapidly growing populations, ambitious development plans, and prolonged periods of drought. The current annual deficit in Israel's renewable water resources is almost 131 billion gallons.

Though the picture seems grim, Israelis have an international reputation for pioneering innovative solutions to the water challenge. On a quiet hillside in the northeastern Galilee, for example, a group of hydrologists and farmers are reaching back into the past to guarantee a viable source of water for future generations. The Shamir project, a partnership between the Israeli government, the Upper Galilee and Golan Heights Water Associations, and Jewish National Fund’s Parsons Water Fund (through the generous donation of Dr. Evelyn G. Lipper and the EGL Charitable Foundation), is drawing unprecedented amounts of water from a 5,000-year-old (according to carbon dating) artesian aquifer.

The Shamir complex (named for the kibbutz it's located above) includes three drills, each around 1.5 kilometers (a little less than a mile) deep, spread over a hilly area sloping down from the Golan Heights into the Hula Valley. One of the deepest drilling operations in the world, Shamir taps into two and a half billion cubic meters of water, more than half the volume of the Sea of Galilee. Contained at a tremendous pressure, the drills release 600 cubic meters (around 160,000 gallons) of water per hour. 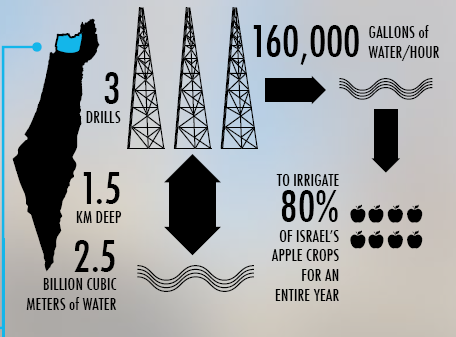 “Just to give a sense of proportion,” says Yigal Hen of the Golan Heights Water Association, “that’s enough water to irrigate 80 percent of Israel’s apple crops for an entire year.”

This potential has already proven itself, when the water was piped up to the Golan Heights last winter, one of the driest in recent history. The emergency supply of water prevented an estimated 150 million shekels ($38 million) in crop damage. As Shabtai Glass, manager of the Shamir site, commented, “In that sense, we are already seeing a return on the investment of both JNF and the State.”

Heating up the local economy

After 5,000 years buried under layers of basalt and limestone, however, the water does not spout from the ground ready for immediate agricultural use. One of its main properties is its unusually high temperature -- 87 degrees C/188 degrees F -- upon extraction. The water is also highly corrosive, which not only presents problems for irrigation, but also impedes transport and storage mechanisms. Committed to streamlining the multi-million dollar project, the Golan and Galilee Water Associations are working, with the help of JNF, on a series of experiments to determine the best method for channeling the corrosive water without damaging pipes and pumping equipment.

The partners are deeply committed to utilizing every valuable drop of water to the fullest.  Before traveling to fields in the Galilee and Golan, the water is directed to an open reservoir above Kibbutz Shamir, where an innovative aeration process helps to evaporate chemicals and bacteria. From here, some of the water takes a short pipe ride up to the orchards and vineyards of the Golan Heights. The rest heads downhill to the Hula Valley, where it makes a pit stop in two remarkable test sites. One is the Galilee Regional Council’s Agricultural R&D Station, where pipes of warm water heat the trunks and branches of several tree species, enabling a longer (and more lucrative) growing cycle. In March, for example, when not an apricot is to be found in the regional market, Galilee farmers can charge a much higher price.

After warming the trees, the water makes its way into the nearby Shamir fish ponds. By creating a cozy 44-degree C (111-degree F) environment, local aquaculture specialists can grow amnon (tilapia) -- one of Israel’s most commonly consumed fish -- all year round. Previously, fish farmers had to move the amnon to the warmer Jordan valley for the winter – a costly and environmentally harmful endeavor. Rafi Noi, head of the Galilee Water Association, notes that this warm-water method is much more sustainable. “As they say, teach a man to fish….with the Shamir water, we are teaching farmers a new and better way to [grow] fish.”

From the fish ponds, the Shamir water spills out into a small canal that will ultimately lead to a planned 1.25 million cubic meter reservoir.  Currently, Hula Valley farmers receive much of their water from the Dan River. Thanks to the Shamir project, the potable water of the Dan will flow freely into the Jordan, ultimately adding 25,000 cubic meters per year to the Sea of Galilee.

The promise of a better life in the north

With massive plans underway to expand the population of northern Israel by 300,000 over the next decade, local and national authorities are beginning to seek creative ways to expand the region’s infrastructure. JNF’s Go North initiative, which is rethinking the entire economy of the Galilee, sees agriculture as a central part of the plan.

As Yigal Hen pointed out, “If you are going to invite young people up here to build their lives, especially if you promise that farming is a viable profession, you have a responsibility to guarantee a stable source of water. This [the Shamir project] is securing the future of the next generation, and many to come.”