As the world is slowly returning to some semblance of normalcy—in-person gatherings are returning, more people are traveling, Israel is re-opening to tourists again next month—Jewish National Fund-USA’s Israel Advocacy and Education Department (IAE) has been consistently preparing for these days ahead. Whether it’s writing up lesson plans at Alexander Muss High School in Israel, planning itineraries for college programs in Israel this summer like Alternative Break, or recruiting for our upcoming Educator’s Mission, we reflect on why it’s so important to return to and reconnect with Israel, no matter at what age. There is always more to see and learn, and more communities to meet and help build. The IAE Department is ready to return to Israel this summer—are you?

"Say What you Mean to Say!" (aka "A Blessing from a Curse")
By Rick Abrams, Israel Programs Admissions Director, NJ & Eastern PA 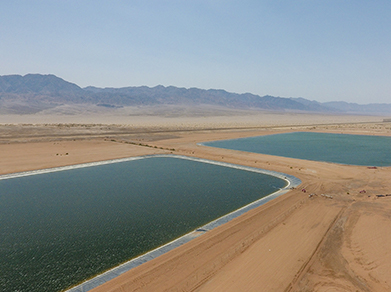 Along their journeys in the midbar/wilderness, the Israelites have had their share of challenges: scouts who doubt what they saw, uprisings from Moses’ own family members, and the constant complaining from the masses.

However, this week’s parashah introduces us to some new characters attempting to destroy the Israelites on their travels. We read from B’midbar, chapter 22:2-6:

Balak son of Zippor saw all that Israel had done to the Amorites. Moab was alarmed because that people was so numerous. Moab dreaded the Israelites, and Moab said to the elders of Midian, “Now this horde will lick clean all that is about us as an ox licks up the grass of the field.”

Balak son of Zippor, who was king of Moab at that time, sent messengers to Balaam son of Beor in Pethor, which is by the Euphrates, in the land of his kinsfolk, to invite him, saying, “There is a people that came out of Egypt; it hides the earth from view, and it is settled next to me. Come then, put a curse upon this people for me, since they are too numerous for me; perhaps I can thus defeat them and drive them out of the land. For I know that he whom you bless is blessed indeed, and he whom you curse is cursed.”

RECAP: Balak, the King of Moab, is nervous due the great number of Israelites crossing his territory. He feels that these Israelites could be a terrible threat to his people. After convening leaders of his tribes, he decides to hire a wizard, Balaam, to curse the Israelites, for if they are cursed, they will not be a bother to the Moabites.

Balaam the wizard is a very interesting character. He is clearly not part of the Israelites, but he seems to have the ability to communicate with both names of God that WE use: The Eternal, and God. He decides to take up Balak’s cause, because God gave him permission. However, God makes it clear that Balaam must say whatever God tells him to say.

So, this does not turn out so well for Balak. After Balaam’s two attempts at cursing the Israelites that wound up as blessings, on the third try…well, it gives us a great way to begin our daily worship services: (Numbers, 24:5-7)

How fair are your tents, O Jacob, Your dwellings, O Israel!

Their boughs drip with moisture, Their roots have abundant water. Their king shall rise above Agag, their kingdom shall be exalted.

The first line of this blessing is very well known, as it is the first line of a poem used in the morning shacharit prayer service. It contains the beautiful description of the Israelite’s encampments as both tents and dwelling places.

Then, Balaam’s blessing moves to include metaphors connecting to nature: The Israelites do not only have fair and goodly tents. They are like a flourishing garden of cedar and palm trees, as well as aloe plants, nurtured by profuse and abundant water.

Nice description, but how often were there oases with abundant water like in this blessing, in the desert?

Back then, probably not that often. But now…. there are! And that’s in part due to Jewish National Fund-USA.

As I recently read in the latest issue of B’Yachad, we donors to the JNF-USA have built: 250 reservoirs (with another 70 in line to build soon) across the country; we are helping Israel meet its need to recycle refuse water (over 85%) for agricultural needs; we are helping to fund research in conservation and desalinization; and are developing technology used in safely drilling deeper for aquifers.

In Balaam’s blessing, God embuses the Israelites and their land with water. It is now our turn to act “godly” and continue JNF-USA’s mission of making the dessert bloom and insuring Israel’s water safety. 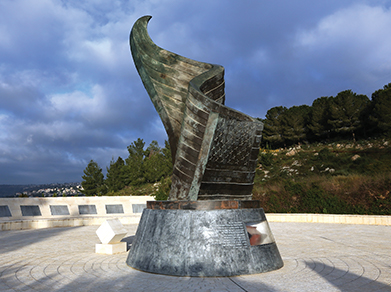 Twenty years ago, the date of September 11, 2001 was just a day, a Tuesday, another day in my week, until it was not…

I remember the details of that day like it was yesterday. I arrived at work just before 8am with a soy latte and poppyseed muffin from my favorite coffee shop, which I always stopped at in Midtown before getting on the train. It was a beautiful sunny day in NYC, and I enjoyed my walk from the bus stop to the gate of my Citibank office building. I slowly logged into my computer, listened to my voice mail, and started my day. CNN was on in the background, but quickly we all gathered around the television, as something was happening…and then we watched the events unfold around us.

Do you have a story like this? Many of us who were adults at the time can remember where we were, what we were wearing or what we were doing, and the shock and horror we felt as we watched the towers fall. We remember the search for survivors and the finding of none. We remember the weeks that followed filled with more sadness and fear as we learned the truth about the terrorist’s horrible plot. We remember the heroic stories of those that tried to rescue others from the rubble. My list of memories can go on and on – but the theme is that we remember.

I remember the fear and the pain I felt being a young adult living in NYC, and the feeling of “that could have been me,” was very hard to shake. I also remember the coming together of communities around the world, the solidarity, the humanity, the many, many heroes – it gave me hope that this world would heal.

Educators – we invite you and your class to join us this year, 20 years later, on 9/11 to honor your local heroes. Your school can participate in a beautiful ceremony where your students will learn about 9/11 in a safe and meaningful way. We will invite your communities’ local heroes to be part of the event and speak to the kids about their role in keeping their community safe.

In addition, we will present your local heroes with a beautiful plaque commemorating 9/11 and JNF-USA’s 9/11 Living Memorial in Jerusalem, Israel. This memorial is the only commemorative site of its type outside of the U.S. that lists all the names of those who perished on 9/11, because Israel understands terrorism and stands with the United States.

If you want more information, please email [email protected] and we will gladly get back to you! 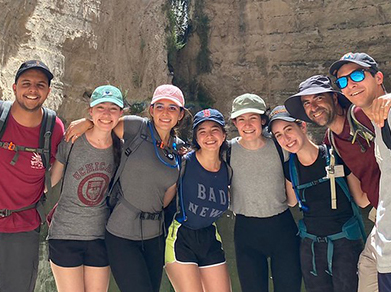 Do you know an incoming college freshman or sophomore who is ready to live in Israel on a gap program? Created by the Alexander Muss Institute for Israel Education (AMIIE-JNF), Frontier Israel is designed to provide a real-life, modern day pioneering experience for either a full gap year or a semester. Immerse yourself in Israeli culture while traveling around the country and volunteering in diverse communities. College credits are available through the University of Miami.

Join the Conversation on Zionism and Global Jewry 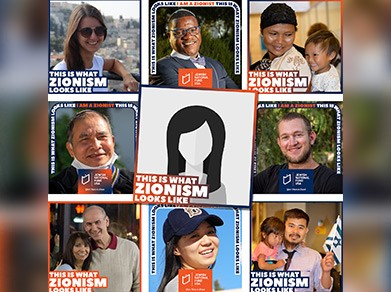 With the vision of creating this ecosystem—the only one of its kind in the world—for global Jewry of all ages to convene at once or at different times on a single campus with programming, shared spaces, accommodations, and harnessing the power of positive Israel/Jewish conversation, Jewish National Fund-USA is building this world-class campus in Be’er Sheva that will revolutionize Zionist and Jewish educational engagement for the decades ahead.

Join the conversation! Here’s how:

Do you have a book club? Maj Jong group? Torah Study Club? We would love to have you help us host a focus group to talk with us about the future of Jewish education and leadership.

Contact us today to set up a focus group!

Show the World What Zionism Looks Like – Add Your Photo!

Show the world that Zionism comes in all shapes and colors by joining our This is Zionism campaign. It’s easy! Go to share.jnf.org to claim your frame, add your photo, and share with your friends using the hashtags #ThisIsZionism & #PoweredByJNF