While summer is here and that often means a quieter time for educators, Jewish National Fund continues to publish content for schools and communities.

There are many opportunities for using new virtual content. Israel Education Online, a virtual learning series taught by educators from Alexander Muss High School in Israel on various topics relating to Israel and Judaism, continues every Tuesday and Thursday at 1pm ET.

In addition, we offer virtual tours of Israel with Israeli tour guides and Alexander Muss High School in Israel educators.  Visit Israel without ever leaving your house!

These are just two of the many examples of how JNF is engaging educators and families this summer.

AMHSI-JNF is starting a Gap Year Program in Israel this Fall for incoming college freshmen and sophomores, which will include volunteering and learning components. Be on the lookout for more information!

As always, don’t hesitate to be in touch and let us know how we can help. 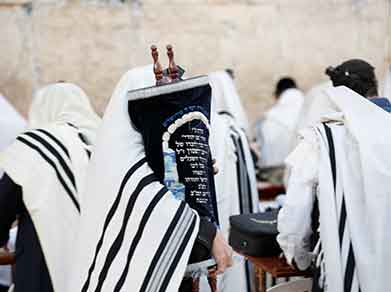 This month we read in the Torah about the story of Korach and the rebellion that he led against Moses and his brother Aaron. Korach’s complaint was that it was not fair that Moses and Aaron held the two most important positions of power and authority in the new Israelite nation, claiming that “all of the nation is holy” since they stood together at Mt. Sinai and equally experienced the tremendous revelation of God. Therefore, Korach says that there is no reason for leadership to be consolidated in one family, specifically between two brothers.

And while Korach’s rebellion ends in utter failure, his claim that everyone is holy still stands on its own as a statement of great insight and truth.

Because each and every individual who is part of the nation is indeed holy.

This was true thousands of years ago and it’s true still today.

Each person in the Jewish nation, and in all nations, is imbued with the ability to influence and shape the world we live in. According to Jewish thought, the fact that someone was born is testament to the fact that they have what to do in the world and what to give the world.

The tragic mistake that Korach made, however, was thinking that, in addition to everyone being holy, that everyone was the same. That it didn’t matter who did what and that anyone can do or be anything, including being the nation’s leaders.

Korach failed to see that each person has his/her unique role to fulfill in this world. That not everyone has what it takes to be a leader like Moses or Aaron and that’s okay. Because not everyone needs to be the leader of an entire nation (or an entire community or organization or group for that matter) to make a difference in the world. That each one of us does have what it takes to be leaders in our own way, living ethical lives of meaning and purpose and being living examples for other people to do the same.

The end of the story of Korach seems to solidify what went wrong with his thinking and with his rebellion. To prove to the nation that his brother Aaron was indeed chosen by God to be the nation’s spiritual leader, Moses tells the head of each of the twelve tribes to take a wooden staff and write his name upon it, Aaron being amongst them. The staffs are then placed together and Moses and proclaims that whoever is the chosen one of God, his staff will miraculously blossom and sprout flowers.

And so it was that Aaron’s staff was the one and only one to blossom and to sprout, clearly proving to the nation that he did not selfishly usurp leadership and power but, rather, was granted it.

But the sign which Moses chose to demonstrate this fact to the nation also served as an explanation as to why it was specifically Aaron who was chosen.

For, as we know, leaders can be self-serving and self-consumed, concerned only with the accumulation of wealth and power, seeing themselves as ultimate rulers with ultimate and unrestricted power.

Or they can be concerned with the interests and needs of the people, seeing themselves more as servants of the nation they lead, focused on helping the nation grow, develop and blossom (and sprout) into the best nation possible. Just like the wooden staff.

And that was Aaron.

As well as Moses.

And that is what true leadership looks like according to the Jewish tradition.

Camp 56 Gives Kids a Taste of Camp This Summer 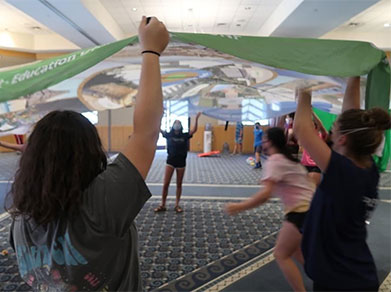 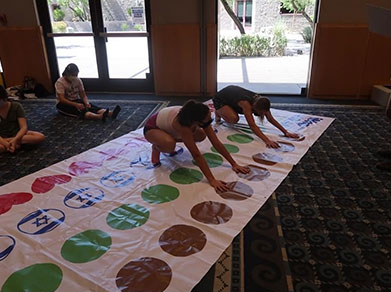 Congregation Beth Israel in Scottsdale, Arizona would normally already be settled into the lush campgrounds of Prescott, Arizona at Camp Harry and Daisy Stein – a reform sleepaway camp – the only Jewish sleepaway camp in Arizona. This summer their plans, like many, had to pivot and adjust to the realities of COVID-19; camp just wasn’t happening this summer. So Camp 56 was born!

Knowing they would leave many campers without a place to go this summer, the leaders of Camp Stein came together to create Camp 56 – a camp experience taking the best of Camp Stein and transplanting it to their multipurpose room at CBI.

Careful to take all recommended precautions, campers arrived wearing face masks and were divided into small groups to allow for social distancing. The counselors know their job is significant this summer – they are the ones helping campers forget about their cancelled summer plans, about their face masks and the friends they didn’t get to see. These counselors are Jewish summer camp heroes!

I was lucky enough to be invited to join them for staff training and teach them about the activities that Jewish National Fund can provide. I spread out all the activities on the floor of the large multipurpose room – and one by one we reviewed each game and activity – and the beauty of Israel education came to life. The counselors had fun challenging themselves with Israel trivia and bouncing the ball on our Israel parachute to discover the beautiful geography of Israel.

Campers going to Camp 56 this summer are lucky that they will get a taste of Jewish summer camp – and thanks to the wonderful leaders of Camp 56, Israel education is an important part of the camp design. Jewish National Fund is proud to partner with local camps and programs to lend our Israel Education materials – for more information contact us at [email protected].

"Muss on the Move" Video Series 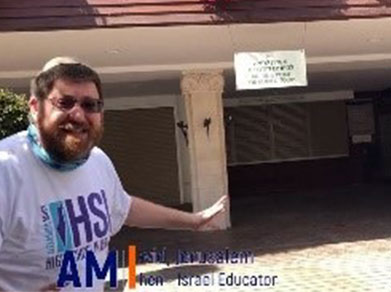 AMHSI-JNF Israel educators are hard at work to provide useful and fun curriculum that you can use to enhance your Israel educational programs. Each video is less than 3 minutes and takes you to a significant historical location in Israel! Past sites have included Yavne, the Negev, Caesarea, and more. Check them out here. Videos are added weekly, so be sure to check back for more content!

Enjoy a side of Israel you have never seen guided by a licensed Tour Guide.

Do you know teens who would love to study in Israel? Applications are still open for our Fall 2020 Sessions! Choose from 16-Week and 8-Week Sessions. Generous financial aid and scholarships available.