As we celebrate the Jewish holiday of Shavuot, we remember the gift of Torah, given to our people at the foot of Mt. Sinai.  Shavuot falls six weeks after Pesach, and typically coincides with the end of our school year.

This year has been a strange one indeed. Who would have ever guessed that we would all be in our homes for over two months, isolated from each other, from our friends and families, virtually connecting with our students?

JNF continues to provide lots of opportunities for virtual content for your schools and communities.  In addition, we are now offering virtual tours of Israel with Israeli tour guides and Alexander Muss High School in Israel educators.  Visit Israel without ever leaving your house!

While summer is here and that often means a quieter time for educators, we are always here for you. Don’t hesitate to be in touch and let us know how we can help.

Shavuot - The Time of the Giving of our Torah 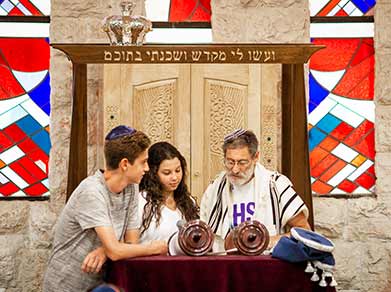 Shavuot, in addition to being an ancient Jewish agricultural holiday, is called “the time of the giving of our Torah”.

To me, there is something a bit strange about the wording of that phrase.

Transfer of ownership is not completed until the giving is actually done, not while the giving is still happening. So, while the Torah was still being given, how can we say that it was already ours? (I know, it’s a very Jewish question!)

Ready for the answer?

The Torah was always ours. Even before it was physically given to us.

How is that possible??

The Torah is called the spiritual DNA of the Jewish people. It’s a compilation of the ethics, values, morals, dreams, hopes, and visions of the Jewish people. It represents who we are as a people and what we are in this world to accomplish. So even before that magical moment at Mt. Sinai, the Torah was already ours, even if we didn’t have it in our hands yet, because it was our destiny. Without it, we don’t exist as a nation. Without its vision, we lack our purpose.

The same can be said about Jewish education. When a Jewish educator teaches Jewish children about Jewish history or tradition, they are giving them something that was already and always theirs. The educator’s main role, then, is to open the students’ eyes to that fact and help them to develop their own personal connection with it all.

We also see this idea come to life shortly after the creation of the State of Israel. In his address to the Knesset on the occasion of the passing of the Law of Return in 1950, David Ben-Gurion said, “The Law of Return does not confer on any Jew the right to settle in Israel; this right is inherent in his very Jewishness…It is not the State that confers on Diaspora Jews the right to return. This right is older than the State of Israel, in fact it is this right that built the State.”

Before there was even a State of Israel, every Jew in the world had a connection with it. It was already theirs. To move to and call home or to learn about and visit and gain inspiration and pride to be part of the Jewish people. 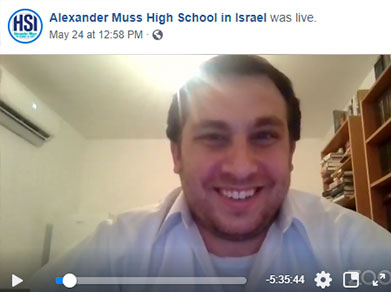 JNF’s Alexander Muss High School in Israel held a virtual Torah-Thon on Sunday in celebration of Shavuot. The event included six hours of inspiring and insightful lectures on the Torah, taught by AMHSI-JNF’s wonderful Israel Educators. If you missed it you can watch it here.

Did you catch JNF’s Israel Birthday Bash on May 14th? 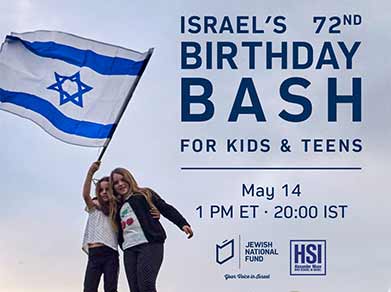 Hosted by Leor Sinai of JNF’s Alexander Muss High School in Israel, this celebration of Israel for kids, teens and families, included music, on-the-spot site visits from locations around Israel, a virtual hike, and more.  If you missed it you can watch it here: Israel's 72nd Birthday Bash

From the Field: 5th Graders at Tifereth Israel Learn about Modern Israel 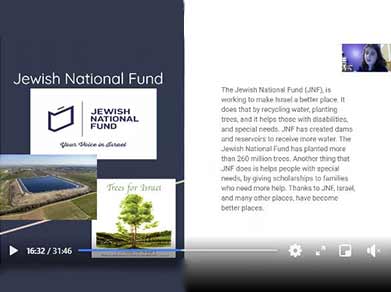 The 5th grade class of Tifereth Israel Congregation in Washington, DC culminated their year with presenting their slide shows on Israel to their parents over Zoom. Starting in January, students worked diligently researching modern Israel and creating their presentation. Each slide show included information about cultural heritage, holy places, Israeli technology, and organizations that promotes peace, as well as highlighting the activities of JNF. Their teacher, Stephen Berer, was inspired to add the JNF piece after participating in the 2019 JNF Summer Educators Mission.

Let us help your school plan a virtual tour to Israel!

Virtual lessons about Israel and Judaism live, every day Monday-Thursday at 1pm ET. Israel Education Online provides students and adults with engaging Israel-related content on various topics, taught by our knowledgeable and passionate AMHSI teachers. Click here for our playlist of past videos.

Just click on the ZOOM link for every call to join us! We can’t wait to see you!

Live videos every weekday from prominent speakers. Check out our schedule and tune in here!

Choose from one of our many sessions available this fall: 16-week Semester, eight-week October and December Mini-mesters, and the National Impact Fellowship.