Our new year has started and we’re already about to celebrate Sukkot.  In September, JNF held its National Conference in Washington, DC and the excitement was palpable.  Of the 1200 participants, almost half were under the age of 40.  This included 50 high school students and 309 college students – all celebrating and supporting Israel!  Our JNF Israel Continuum, from Birth to the Boardroom, is growing and strong, and impacts students and adults of all ages.  We can confidently say, “Our future is in good hands!”

About 2,500 years ago the leaders of the Jewish community stood in Jerusalem, waiting anxiously for Ezra the Scribe to explain to them the words of the Torah. The Torah was complicated and long, and not every Jew had the ability to read. The result was confusion, a misunderstanding of Judaism, and a disunited Jewish community.

Ezra the Scribe, recognizing the situation, took the Torah, stood in front of a group of confused people and explained it to them, with the help of the Levites. The book of Nehemia, Chapter 8, tells us that the people then ate and drank and celebrated this day. However, we do not learn the specifics of what they were taught until we reach verse 13 where the following is written:

"Go out to the hills and bring branches of olive, wild olive, myrtle, palm, and other leafy trees to make booths, as it is written'.  So the people went out and brought them, and made booths for themselves, each on the roofs of their houses." (Nehemia 8).

Ezra is instructing the Jewish community to go out and find the material needed for the celebration of Sukkot. The Jewish people will create booths for themselves and their families, and will dwell in them for eight days. The underlying idea of this booth, which we call a sukkah, is to remind us, the people of Israel, of the fragile dwellings in which our ancestors lived during the 40 years they spent in the desert. The sukkah is the mechanism by which we feel connected with our history, but just as importantly, it is a mechanism that provides us with a way to spend time with our friends and family.

Ezra saw a Jewish community in need of guidance - of a leader - and he tried to be this leader. He read the Torah with the people of this community and aimed to explain it to them, surely in the most interesting way he could. But once he provided the basics, he had to trust that they would take what they had learned and use it in their own creative way to move forward.

I see Ezra's leadership, and the holiday of Sukkot, as symbols of what we are trying to do at AMHSI-JNF. The students who arrive seek our guidance and, like Ezra, we aim to teach them in a way that will be interesting and meaningful to them. We continuously make efforts to show them that Judaism, much like Sukkot, is about the combination of remembering and keeping our religion and tradition alive, along with creating opportunities to spend time with our friends and family.

Ezra understood that good teachers are those who realize the only thing they can give their students are the tools to achieve certain goals, and that the students must be the ones to make the choice to use them.  As a teacher at AMHSI-JNF, I feel very privileged to be able to follow in his footsteps and take part in teaching the next generation of Jews about the wonderful traditions we have.

JNF Commemorates 9/11 Throughout the Country

For the fifth consecutive year, Jewish National Fund hosted events across the nation, honoring our communities’ first responders and remembering those who gave the ultimate sacrifice on September 11th. Partnering with local schools, synagogues, Israeli Consulates, and Embassies, JNF presented each fire station with a beautiful plaque with a picture of the JNF 9/11 Living Memorial in the foothills of Jerusalem.

This year we hosted 20 events, engaged with over 1,200 students, AMHSI-JNF alumni, and lay leaders, and presented over 25 plaques to firefighters, police officers, and first responders. We showed our gratitude for the daily sacrifices made by our communal first responders, taught the students about the heroism of that tragic day, and recognized our shared values with the State of Israel.  Thank you to the following schools and synagogues that partnered with us:

My experience at the JNF National Conference in D.C. was educational and fun. I’ve been involved with JNF ever since attending Roots Israel in 2017. After an inspiring trip around Israel, learning about agriculture and community service, I attended my first conference. My passion for my homeland grew after every session.

I elected to attend AMSHI-JNF as a JNF Impact Fellow during my junior year of high school. That experience shaped my life and changed my perspective on Judaism. I wanted to continue my Israel engagement and participated in the Teen Summit at the most recent JNF National Conference in D.C. I loved learning about Israel’s sustainable water innovations and how they’re being shared with the world. Plus, I made new friends who share the same interests.

Next year, I go off to college where I’ll face backlash for my identity. Learning how to respond to BDS and understanding more about cross-cultural tension within Israel was a crucial part of the conference. I plan to extend my Israel leadership in college and learn to fearlessly speak my truth.

Aryeh Izak, a 13-year-old boy from Miami, celebrated his Bar Mitzvah in Jerusalem and asked all his guests for this occasion to donate to Special in Uniform.

In a special JNF tribute page Aryeh wrote to his family and friends:

"In honor of my Bar Mitzvah I'm asking to support a worthy cause very dear to my heart, the Special in Uniform program, which integrates young people with disabilities into the Israel Defense Forces (IDF), and in turn into Israeli society."

Thanks to Aryeh's kindness, another soldier from our waiting list will enlist to the army soon.

Thank you Aryeh, and Mazal Tov to the entire Izak Family! 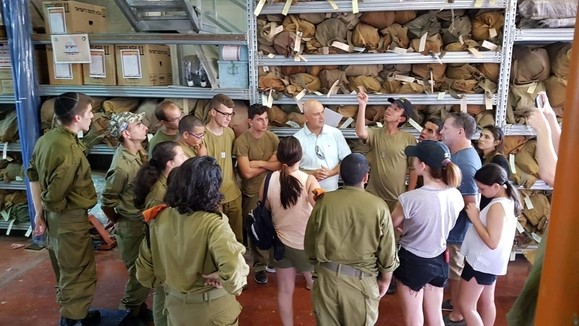 Eden Turk, a 12-year-old girl from New York, also celebrated her Bat Mitzvah with Jewish National Fund affiliate Special in Uniform soldiers, bringing them special gifts and most importantly a lot of love.

Mazal tov Eden and thank you – it was a very special celebration with you and your family! You warmed the hearts of our soldiers!

Israel Resources for Your Classroom

The Jewish National Fund (JNF), established in 1901, was a key Zionist organization that encouraged and assisted Jewish immigration and land settlement in building the Jewish National Home in Palestine. The JNF’s primary goal then was to evaluate and purchase land that could be used to create rural Jewish settlements and to develop urban areas. It engaged in fundraising abroad and, from the 1920s onward, regularly participated in Jewish Agency discussions about acquiring land for the Jewish National Home. More than half of the land that Jews acquired before Israel’s declaration of independence in May 1948 was held by JNF.

JNF conducted periodic meetings to make decisions about which lands to acquire at what price, and where to raise the necessary funds. Considerations for land purchase included water availability, location in relation to present or future Jewish holdings, viability of land quality to support a specific number of Jewish farmers, number of Arab peasants in residence, and speed with which the sale might take place. Besides JNF Board Directors living in Palestine, leading Zionist activists participated in such discussions, among them, David Ben-Gurion (later Israel’s first Prime Minister), Moshe Shertok (later Moshe Sharett, Israel’s first Foreign Minister), Chaim Weizmann (later Israel’s first President), and Yehoshua Hankin the leading Zionist real estate specialist.  Key JNF decision makers during the Mandate included, among others, Menachem Ussishkin, Abraham Granovsky (Granott), and Yosef Weitz.

This JNF document referred to here, "The Political Significance of Jewish Land Purchase, December 1937," details discussions about which geographic areas should be purchase priorities. With limited funds at JNF’s disposal for new acquisitions, critical strategic zones included lands near the Haifa port and the Iraqi oil-pipeline terminus, Galilee water sources, the Jerusalem-Jaffa Road, and other small areas contiguous to already Jewish held land. JNF received multiple Arab sales offers. Surrounded by periods of violence and political uncertainty, some Palestinian Arabs chose to part with their lands because they sensed holding land might not continue to be a lucrative investment. Other documents referencing Jewish nation building may be found at www.israeled.org. When reading this transcript, consider these questions.

Over the next seven years after this December 1937 meeting, more than 50% of the lands suggested for purchase were secured by JNF.

Jewish National Fund unveiled plans for the Israel Education and Technology Campus located in the brand new Be’er Sheva River Park (also a JNF-USA project). The campus will include three major components: a technology center for graduate students from the United States; an Israel education center for visiting groups; and a new southern campus for Jewish National Fund’s Alexander Muss High School in Israel (AMHSI-JNF), whose current location is in Hod HaSharon, just outside Tel Aviv. The technology center will give students an opportunity to live on the campus and enjoy all that the region offers. The second component, the Israel education center, will attract tourist groups from across the globe who will spend time learning about the history of Israel and Zionism. The project’s third “leg” is the second campus for the Alexander Muss High School in Israel, which will accommodate the burgeoning enrollment of the school.  Watch the video to learn more: https://www.youtube.com/watch?v=pdxJzoDpQHU

Zohar Vloski is an Education-focused Israel Emissary for KKL-JNF in Florida and was KKL-JNF Executive Director, Education Division. Zohar is LT. COL (reserve) and served for 25 years in the IDF, as a commander of education units, a key driver of the military’s educational systems, and a leader in connecting the Birthright Israel program to Israeli soldiers. As an educational entrepreneur over the course of three decades, he has implemented training programs in Jewish and Zionist identity, Holocaust studies, and Jewish leadership and culture. He has a masters degree LL.M in law, a bachelors degree in Law and Israel studies, and is a certified tour guide for Israel’s Ministry of Tourism in Israel as well as for Yad Vashem to Poland.  Zohar was born and raised in Israel, and lived in Shaarey-Tikva, a community village.  He and his family currently live in Boca Raton, FL.  Zohar works throughout the Florida community to bring JNF and Israel to schools, synagogues, campuses and the entire community.  Zohar can be reached at  [email protected] or 561.447.9733 ext. 898.