I sincerely hope this Chanukah season is filling your homes with light.

We have reached another benchmark toward our $1 Billion goal as we are now over $650 million. I am also pleased to report that we are over $30 million for our 2020 annual campaign.

I thought there is no better message to share with you today than that of the recent OpEd penned by JNF CEO Russell F. Robinson for JNS (Jewish News Syndicate) titled, The Jewish People Live. https://www.jns.org/opinion/the-jewish-people-live/

As you know we are always trying to keep up with the latest and most effective ways to communicate with our donors. As such, we are moving to communicating more and more with our donors via text. It is a timely, effective, concise, and faster-read means of delivering information in today’s busy world and we are careful to use it judiciously. As a member of our leadership team, it is important that you are opted in to receive these texts. Please text JNF to 563-872 which will opt you in.

The single largest project in the history of JNF-USA is the Israel Education and Technology Campus in Be’er Sheva. This $300 million dollar campus will have several functions: a second home for the Alexander Muss High School, an adult Zionist education and conference center, and a campus for young adults in Israel for technology internships. The campus will be situated on 16 acres of land within the Be’er Sheva River Park. As you can imagine with a capital project of this magnitude, there are significant naming opportunities. A feasibility study was just completed by KPMG and fundraising is just now getting underway. To learn more about this exciting and transformational project, watch this video: https://youtu.be/pdxJzoDpQHU

I am happy to report that over 400 people have already registered for the 2020 National Conference taking place in Israel next October 25 – 29. We are well on our way of reaching our goal to bring 1,000 people to Israel for the Conference. A friendly competition is underway among local communities for who can bring the most to Israel. Register now! The early discounted rate for the registration fee is only available through December 31st. To learn more about NC 2020 in Israel, click here:  jnf.org/nc 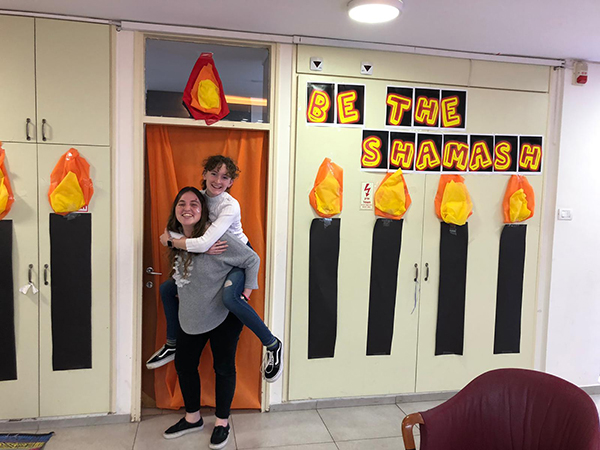 This week, we celebrated Chanukah with a music and treats on campus, and a festive lunch for staff, teachers, and alumni.

Capture your forever young hearts and minds on this carefully-paced, life-changing, 10-day excursion. Learn more about one of our most popular annual tours here.

This week on IsraelCast, we are visited by Lucy Aharish, one of the most influential journalists in Israel. During this captivating conversation, Lucy speaks about being an Israeli Arab Muslim woman and how she has persevered despite a Molotov Cocktail being thrown in her car and abundant backlash and hatred for marrying an Israeli Jew. Listen here.

Winter Festival is in full swing! Most events were sold out or almost booked, including the Vocal Concert which takes place at the JNF Western Galilee Tourist Information Center in Old Akko. Over 30 events are taking place around the Galilee, with many visitors coming to the region especially for the Festival and staying overnight to enjoy the festivities.

This week, Jewish National Fund affiliate Special in Uniform soldiers gathered for a special celebration and menorah-lighting in the Palmachim Airbase. General Yoav Amram, Palmachim base commander, joined the soldiers and told them, "You are the modern day Maccabees by your dedication and determination to never give up."

This week, Jews around the world are celebrating Chanukah: lighting menorahs, spinning the dreidel, exchanging gifts, and frying up latkes.

What are we celebrating again?

In the second century BCE, the Holy Land was ruled by the Seleucids (Syrian-Greeks). The first of the Syrian Kings to rule the land was Antiochus III. He was a rather benevolent ruler who allowed the Jews to live and practice their faith in relative peace. His son, Antiochus IV was decidedly not benevolent. He outlawed Judaism and subjected the Jews to a forced integration into the acceptance of Greek culture and beliefs instead of mitzvah observance and belief in G‑d. Among other things, circumcision and observance of Shabbat was made punishable by death, the Temple in Jerusalem was desecrated, the holy oil fouled, and the Temple itself renamed for the Greek god Zeus.

Against all odds, a small band of faithful but poorly-armed Jews sought to resist and fight this oppression. Led by Judah the Maccabee, they defeated one of the mightiest armies on earth. They drove the Greeks from the land and reclaimed the Holy Temple in Jerusalem where it was rededicated to the service of G‑d.

When they sought to light the Temple's Menorah (the seven-branched candelabrum), the Maccabees found only a single cruse of olive oil. Miraculously, this small amount of oil lasted the eight days it took for the return of the messenger charged with replenishing a supply of oil prepared under conditions of ritual purity.

To commemorate and publicize these miracles, the sages instituted the festival of Chanukah.

So, what are the flickering flames of the Chanukah lights telling us and why have we famously been told to “listen carefully to what the candles are saying”?

Here is what Russell F. Robinson wrote this week in is article “The Jewish people live”:

Russell spoke about how JNF honored our friend Marina Furman. Marina stood up to the tyrants of the Soviet Union and put her life—and that of her family’s—on the line to enable her and her fellow Jews escape to Israel and freedom. “She is one of the strongest women I know and a powerful reminder of our people’s unyielding desire to live,” he said.

Russell concluded: “For those celebrating Chanukah, when you light the candles this year, look at the flame, remember those we lost, and then see Marina the refusenik, see the Israeli medical researchers curing cancer and see the teenagers at Muss looking up at the stars while learning about 4,000 years of Jewish history in a land called Israel, the eternal homeland of the Jewish people.”

So, let us never be afraid to stand up for what’s right. Judah Maccabee and his band faced daunting odds, but that didn’t stop them. With a prayer on their lips and faith in their heart, they entered the battle of their lives—and won. We can do the same.