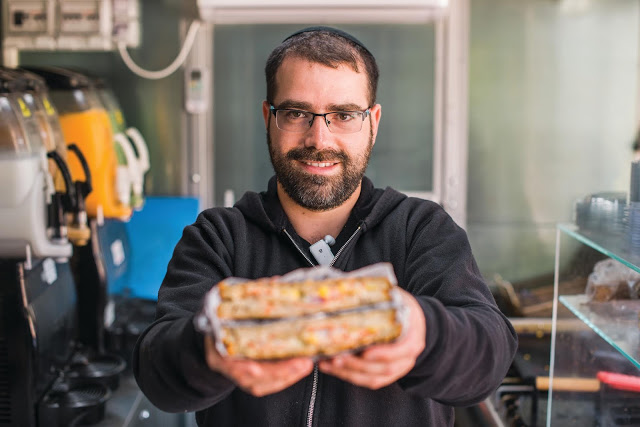 "We’ve basically made a mini-restaurant on wheels," said Shimon Shain. "Even the health inspector was impressed with the design of the food truck." Be it sushi, tuna melts, a classic falafel sandwich, fish and chips, fries, waffles, hearty pancakes, a refreshing ice coffee, or just plain toast, Shain and his small fleet of food trucks around Israel's Golan Heights serve anything and everything to tourists, workers, and students. But don’t expect the menus to stay the same for long; they vary as clients' demands change.

Brooklyn-born and raised, Shimon, 34, and his wife, Sara, moved from the glitz and glamour of Los Angeles in July 2016 to the calm and tranquility of Hispin, a scenic town of 1,400 residents in the heart of the Golan Heights. "We like the cattle and the agriculture. We preferred to live in the north or the south -- in a quiet area," Shain said.

The Shains felt like there was still something missing from the Golan scene. Shain, who studied at the Jerusalem School of Culinary Arts, used his expertise in gastronomic studies and his extensive experience in the food industry to establish Shimmy’s, a mobile food service -- known as the beloved food truck in the U.S. -- that prepares and sells food throughout the Golan region.

"The Golan is excellent for entrepreneurs because it is still being developed, and there are many things from America that can be introduced in Israel," said Shain. "When we arrived here there were no food trucks, yet people love them. The Golan is not large enough to support a full restaurant, but it works for a traveling food truck going from town to town."

And so, the idea for an American-style food truck was born.

The Shains were able to save the grant money they had received from Jewish National Fund partner Nefesh B'Nefesh to start Shimmy's. "The financial support we received from Nefesh B'Nefesh was transformative," said Shain. "It gave us the confidence and financial stability, which enabled us to allocate some of our other funds toward a down payment on our first food truck." On the one-year anniversary of their aliyah, they took delivery of their first food truck and a second one sixth months later.

As his business took off, Shain noticed a pattern. Spring and summer months became very busy, with many observant families coming up north for vacations with their children. Starting a kosher food truck and the intricacies of getting kosher certified seemed daunting, but worth it. Since Shain was renting a food truck previously belonging to the food chain Cofix, the inspection was more than up to code, making his certification smoother. The kosher food truck was a success and Shain had a food truck of his own built.

Today, he owns two food trucks and a restaurant, with over 15 employees during the busy months. One of the food trucks is based in Hispin, serving the community’s students and faculty from elementary schools, high schools, and seminaries. The other travels to local army bases, camp sites, and hostels. He also operates a kiosk near Nahal El Al, one of the largest and most popular hiking destinations in the Golan Heights.

"Each location is geared towards a specific clientele," he explained. His menu varies depending on location, but his first experiment was with made-to-order sushi, as he noticed the lack of Japanese cuisine in the Golan.

Like Shain, Jewish National Fund has also seen opportunity in the food industry and is in the planning stages of transforming the Upper Eastern Galilee into the culinary capital of the world. The Jewish National Fund International Institute of Culinary Arts is slated to open in the coming year, and the Beit Asher Food Tech Quarter on the Greenbaum Family Campus in Kiryat Shmona is already under construction. Both projects will have an immense impact on the region’s economy, including Shain's thriving business and his love of food.

"Immigrants bring to Israel the ideas that they have from their own country,: said Shain. "There are opportunities. You just have to be creative."

Follow Shimmy's Truck on Facebook for their locations in the Golan Heights. To learn more about JNF’s plans for the Upper Eastern Galilee or to join the Go North East Task Force, contact [email protected].

This article originally appeared in the summer 2019 issue of B'Yachad. Click here to read the rest of the issue.
PLANT TREES IN ISRAEL