In the JNF Kitchen: Traditional shakshuka eggs with special spices 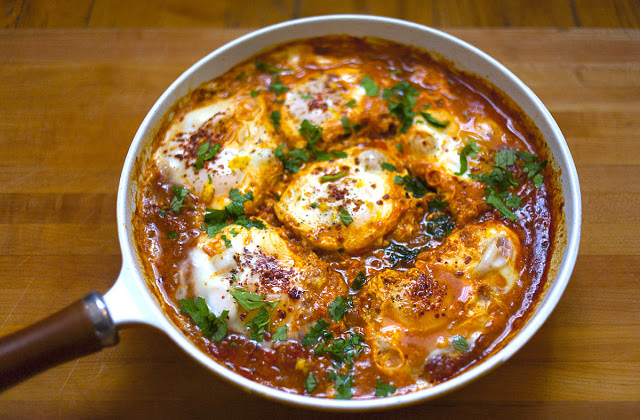 This recipe of the week comes to us from La Boite, a biscuits and spice shop in New York City owned by Israeli chef and spice blender Lior Lev Sercarz. Lior and La Boite have gained international fame for mixing spices in a unique way and selling some of the world's rarest blends. Lior opened his culinary superstore after traveling and studying around the globe, and he dreams of establishing a cooking school in Israel's north along with JNF.

Christian Leue of La Boite shares this quintessential Israeli dish. "Growing up I ate a lot of soft eggs at my mom’s house," he says. "It was often tamago kake gohan (raw egg over hot Japanese rice), and at my dad’s, strammer max (a slice of butter-fried rye bread topped with ham and a fried egg). The first time I had shakshuka at a friend’s house it hit that same comforting sweet spot, and I’ve been making it at home ever since. Often eaten for breakfast like the simple egg dishes I grew up with, it’s also fantastic for dinner."

The dish features exclusive La Boite blends, but they can be modified for home cooks. For example, the store's "Izak N37, a dry version of harissa using sweet chiles, garlic, and cumin, is a nod to the dish’s Tunisian origins, and Sheba N40 adds heat and the gentle warmth and sweetness of ginger and cinnamon."

Instead of plain salt, Christian uses a combination of shio koji, (Japanese salted and fermented rice with a deep and rich flavor), and salt preserved lemon, which gives a great acidity and freshness without bitterness.

Serves 3, make a double batch in two skillets for a crowd

In a heavy skillet, warm the olive oil over medium heat. When fragrant, add the onions and cook for 3-5 minutes. Add the peppers and cook for 5-7 minutes more or until everything is softened and lightly browned. Add garlic and spices and cook for 2-3 minutes more, stirring more frequently. Add the remaining tomatoes, tomato paste, shio koji, and preserved lemon and cook, stirring occasionally, for another 10-15 minutes or until noticeably thicker, like pasta sauce. Taste and adjust for sweetness, salt, and heat.

Make a small divot for each egg with the back of a spoon and gently crack an egg into each, keeping the yolk intact. Cover pan with a lid and simmer until whites are set but yolks are still runny (timing will depend on how you like your eggs, but 5 minutes is a good time to check them).

Garnish and serve with toasted bread (I prefer sourdough) and green zhoug* (optional, but this cilantro-laden Yemeni hot sauce is a great match; Yemen has a delicious version of shakshuka as well that's more of a scramble).

This post originally appeared on the La Boite blog.
PLANT TREES IN ISRAEL