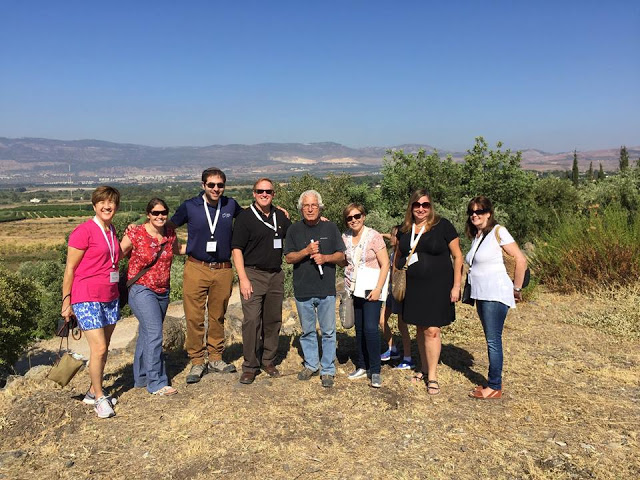 We're celebrating Women's History Month all March long by sharing stories of the amazing women who make up Jewish National Fund! In addition, we're matching all donations up to a total $1 million during this time. Learn more: jnf.org/women

My story with Jewish National Fund's Kiryat Shmona & Upper Eastern Galilee Task Force displays JNF at its finest. During the summer of 2016, I was at the Knesset with my good friend Nadav Douani, who is chief of staff for Science Minister Ofir Akunis. Nadav asked if I would like to visit the Knesset members' dining room and meet politician and former Israel ambassador to the U.S. Michael Oren. It was truly special to meet him, and when Nadav told him I was very involved with JNF, Michael Oren said, "Please remind Russell Robinson (JNF CEO) of all the work we need to do in Metulla."

So, I called Russell from Jerusalem and he said we have much to do for our Go North initiative and we are going to put you on our Upper Eastern Galilee Task Force with Dr. Melinda Wolf.

After my first call with Melinda, I was asked, in true JNF fashion, to co-chair the task force. Melinda has since stepped away to grow other aspects of JNF's efforts, and I have taken on the projects with our amazing professionals Reagan Weill and Lee Lebovich.

We have the most dynamic group of JNF lay leaders working with us and a cadre of dedicated local experts in Israel (including the brilliant Knesset Member Erel Margalit and his team, along with Lior Sercarz, the world's leading spice maker) who want to transform the north of Israel into a food and technology hub. Our culinary programs are truly exciting.

In a short period of time working closely with Russell, Eric Michaelson (JNF chief Israel officer), and Yoel Rosby (JNF initiatives coordinator in the Israel office), we have three projects underway as game changers to invigorate the region.

Last summer, we visited the Upper Eastern Galilee with my youngest Mia (who was 8 then) and we worked on what Russell calls "touching the earth" and setting down plans -- such as for a food technology center, state-of-the-art culinary academy, and medical center.

I will be returning to the region in advance of the JNF President's Society Experience mission this April to continue with meetings, and look forward to returning with the entire Kiryat Shmona & Upper Eastern Galilee Task Force in late 2018. We are beyond excited about the initiatives and working to improve the lives of residents in the region that have faced so many struggles.
PLANT TREES IN ISRAEL