In the JNF Kitchen: Stuffed zucchinis and vine leaves 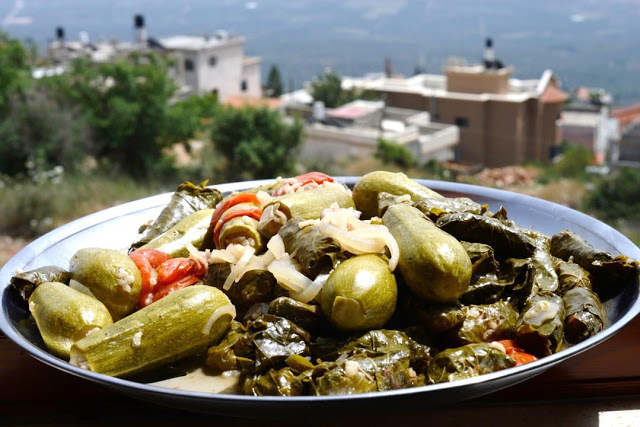 This #RecipeOfTheWeek is from the Druze village of Julis, one of the charming locations where GallilEATS organizes culinary experiences and cooking workshops. It is brought to you by GallilEATs owner Paul Nirens, who has lived in the rural Galilee region for almost 30 years and is a former chef who trained at one of Israel's leading culinary schools.
Paul describes Galilee as Israel's Provence or Tuscany; the region offers a bounty of top-quality, locally grown produce, including olives, fruits, and vegetables that have been staples since biblical days. In the last few years, the area has become a paradise for foodies and wine enthusiasts, offering boutique gourmet products ranging from cheeses, meats, breads, and conserves to beers, wines, and liqueurs.
The Galilee is also unique in its ethnic distribution: residing in this small 1,400-square-kilometer area (540 square miles) are Jews, Muslims, Christians, and Druze who live together and share a passion for food and the region. The Israeli Druze are a unique religious minority of Arab descent, citizens of Israel who serve in the Israel Defense Forces, with some members of the community holding top positions in Israeli politics and public service.
Julis, despite having only 600 inhabitants, is an important village within the Druze and broader Israeli society as it is the place where David Ben-Gurion signed the brothers-in-arms pact with Israel's Druze, not long after the creation of the state of Israel. The sheik (Druze holyman) Amin Tarrif signed the pact on behalf of the Druze and subsequently almost every Druze home in Israel has a picture of him on the wall.
Through GalilEat, Paul shares his passion for Galilean village culture and traditional food preparation with Israeli tourists and visitors from overseas. He'll show you a slice of Israel that's authentic and different from what most tourists see. A Galileat adventure allows an in-depth view of the real Israel.
Paul is a member of JNF partner organization Western Galilee Now, a consortium of small businesses in the region. The Galilee region is a key focus of the JNF GoNorth development initiative. See our gallery below for more scenes from the area.
Shabbat Shalom!

Carefully hollow out zucchinis with a sharp knife or special rounded blade.

Grate 2 tomatoes into rice. Mix in all remaining ingredients, except third tomato, into rice.

Hold 1 vine leaf flat on the palm of your hand. Add 1 teaspoon of the rice mixture. Fold in the sides and roll up the vine leaf. Repeat with 35 vine leaves.

Line the bottom of a pot with reserved vine leaves or sliced tomatoes.

Pack rolled vine leaves and stuffed zucchinis into the pot and fill the pot with salted water to cover stuffed vegetables.

Place an inverted plate over the vegetables so as to prevent them floating to the top and becoming unraveled.

Cover the pot, bring to boil, and then reduce the heat.

Cook for 40 minutes. Occasionally check if there is enough water. Add a 1/2 cup of water if necessary.

**The zucchinis can be cooked separately in water until they just begin to soften.